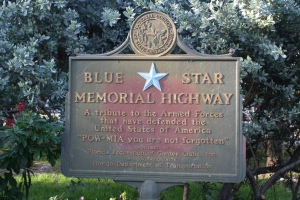 Have you seen this NEW sign? OK, it’s an old sign that’s gone unnoticed by me for years. I now know of three of them in the Florida Keys, this one is set back at least 50′ or 60′ off of US-1 and is barely visible being surrounded by trees!

The Blue Star Memorial Highway system is located throughout the United States and is a ‘Living Memorial’ tribute to the men & women of the armed forces that have defended the United States of America. The idea dates to 1944 in the waning years of WWII when the New Jersey State Council of Garden Clubs beautified a 5½-mile stretch of US-22 with approximately 8,000 dogwood trees that were planted for the men and women serving from their state.

The Blue Star itself was taken from the blue star in the military service flag and was chosen to symbolize the memorial because it was used during World War II on flags and homes of families that had a son or daughter in the service. Since 1944 the Blue Star Highway has spread throughout the United States including the Florida Keys that are proud to have three of these Historical Markers at Mile Markers 99.4, 50.3 & 4.1 on US-1 heading south to Key West. This featured sign is at Mile Marker 4.1 just over the Cow Key Bridge as you enter Key West on US-1.

The State of Florida’s three Keys sites uses a display of shrubs & flowers as their ‘Living Tributes’. So on your next trip to the Keys you can now educate your car load of companions with this bit of knowledge that so many others unfortunately haven’t a clue… but now you do! 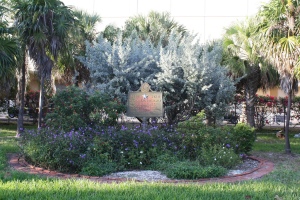