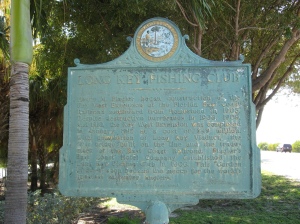 Wow, is this sign hard to see while driving down the road! You need to look for a faded historical marker along the treeline and you just might see it.

Here’s the little seen and even less read Long Key Fishing Club historical double-sided marker. I’ve passed this hundreds of times going in each direction and have NEVER seen a single tourist at its foot post reading the text written upon it. Believe it or not, this fishing club sign is tied into the construction of the East Coast Railway and here’s how. Henry M. Flagler began construction of the railway in 1905 completing it in 1912. During that time, in 1906 the Long Key viaduct was the first bridge built in the process of connecting the keys together for railway traffic and became the poster child of Henry Flagler used in advertisements. He too promoted the fishing of the Keys by forming the Long Key Fishing Club in 1906 and attracting the greatest saltwater fisherman to the area because of it… and now you know the rest of the story!

No, I don’t expect every one of you to stop and read it but would be thrilled to death if you do slow down before passing it and point saying “There it is, we found it… and there’s still NOBODY reading it!

You can try to find this super faded historic marker of the Long Key Fishing Club at Mile Marker 65.8 oceanside on your drive in the beautiful Florida Keys.