MIAMI, Fla. /Florida Newswire/ — Dating back to the late 19th century we’ve all heard and possibly even used the phrase “Hot Diggity Dog.” The phrase is used as an exclamation of surprise and delight. Today, A Good Health Company, Inc. (DBA Hot Diggity Dog Entertainment) would like to take this opportunity to introduce on a national level, the character “HOT DIGGITY DOG!” The All-American Airedale. 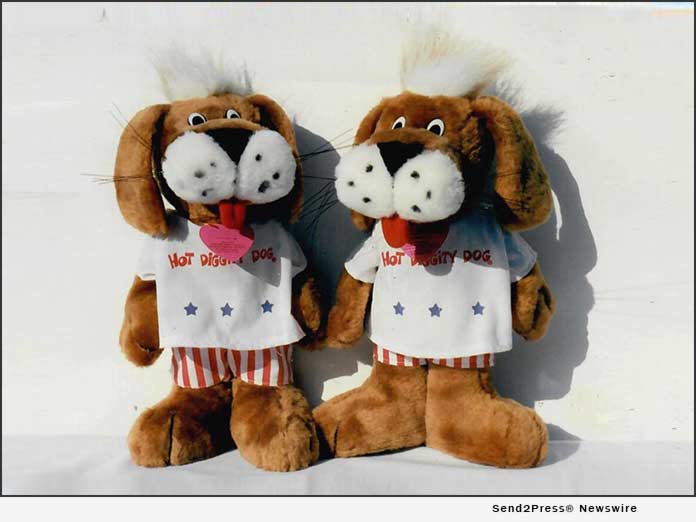 Hot Diggity Dog is quick-witted and self-assured, he is also sports minded and loves the children as well as adults. “Hot Diggity Dog reminds us all that it’s all right to ‘Do The Right Thing!’” the company’s VP of marketing, E.L. Williams Jr., says. “Hot Diggity Dog has great mass market appeal, we have been marketing the plush character since 1989, everyone who sees him loves him.”

“Dating back to the year 2000, The William Bodenhammer Company obtained the rights to Hot Diggity Dog, allowing the development and distribution of a comic strip, before the venture could get off the ground Mr. Bodenhammer passed away,” said Williams.

Over the years the company has had other licensing opportunities but for various reasons decided to forgo them. The company passed on the opportunity allowing Hot Diggity Dog to appear in the Macy’s Thanksgiving Day Parade. The company President along with the late Tommy Ford (“Martin” TV show) got together and wrote a children’s book “Hot Diggity Dogs From A TO Z…Dads Can Too!” which was a friendly reader, coloring and activity book depicting fun activities between children and their dads.

Well the time has now come and the company is ready to actively seek licensing opportunities in various product categories including but not limited to; print, stationary, greeting cards, interactive publishing, television, toys, games and foods.

“Taking into account the popularity of the phrase, coupled with the looks and characteristics of Hot Diggity Dog the character, it won’t be long before he is a household name and virtually everyone is saying ‘Hot Diggity Dog!’ It’s The Dog Y’all!” adds Williams.

For more information or contacts please visit us at https://www.hddplush.com/

*Assumes 2.799% APR, 20% down payment, and conforming 30-year fixed rate first mortgage on a single family, primary residence. The monthly payment you enter includes only principal and interest. Additional required amounts such as taxes, insurance, home owner association dues, assessments, mortgage insurance premiums, flood insurance or other such required payments should also be considered. Not all individuals will qualify for a mortgage loan based on the payment entered. Rates cited are for instructional purposes only; current rates are subject to change at any time without notice.  **Posted APR is based on Mortgage Assumptions.
Copyright © 2021 Fidelity Home Group supports Equal Housing Opportunity | All Right Reserved  | NMLS Identifier 1834853. Fidelity Home Group is not affiliated with the Department of Housing and Urban Development (HUD) or the Federal Housing Administration (FHA). Not intended for legal or financial advice, consult your own professionals if such advice is sought. Accessibility Statement  | Consent to Receive Electronic Loan Documents  |  Cookies Policy   |  Disclosures  | Email and Mobile Policy |  Fair Lending Policy  |  Mortgage Assumptions  |  NMLS Consumer Access  |  Privacy Policy  |  Terms of Use
Contact Us
786-755-7400
Schedule a Call
Schedule an Appointment
Send a Message