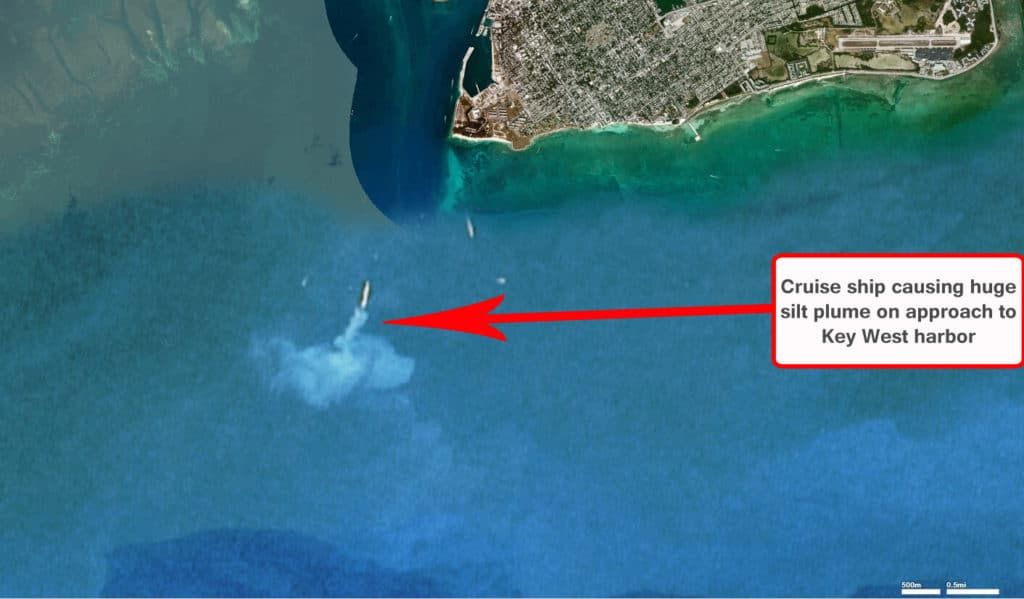 Cruise ships are already too large for the shallow Florida Keys National Marine Sanctuary. Yet some want even larger ships.

Old time residents of Key West bemoan how the nearshore water is no longer crystal clear. Locals who snorkel and dive the reef wonder where the 100-foot visibility days went. Fishermen shake their heads at how dredging the main ship channel to accommodate larger ships destroyed miles of coral and sea-bottom communities, on which many fish are dependent, while allowing large cruise ships to regularly stir up the bottom and silt the water with their massive propellers.

Yet a small but powerful minority of Key West business interests who cater to cruise ships don’t want you to know the real truth: cruise ships are doing damage to the fragile Florida Keys eco-system. To further their business interests, these mass-tourism business owners are trying to sell the idea that a study is needed to determine the feasibility of dredging to accommodate larger cruise ships.

But studies have already been done, the most recent was the Army Corp Reconnaissance Study of 2010 which concluded:

This project is anticipated to have a significant negative effect on environmental quality. Widening the channel would have significant and negative effects on an unspecified amount of coral lightly distributed over approximately 17 acres. The project would also have negative effects on an unspecified amount of critical environmental habitat. Increased cruise traffic, as with an increase in any waterborne commerce, would likely also cause an increase in water pollution and turbidity

But these are just words. Sometimes a picture can do a better job of telling the story.

So, here is a satellite image from DigitalGlobe (which is what Bing uses in its maps) showing a cruise ship approaching Key West harbor causing a massive silt plume. This is a rare picture of what cruise ships regularly do to our water. And keep in mind, in 2012, 327 cruise ships arrived in Key West.

In October residents of Key West will vote on a referendum asking if they want to study dredging for even bigger cruise ships.